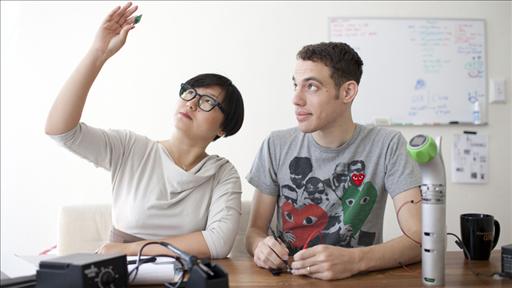 A long-shunned Silicon Valley technology sector - consumer-electronics start-ups - is showing some surprising signs of life. One San Francisco couple is making a $359 kitchen appliance dubbed Nomiku, which people can use to "sous-vide" food. Jessica Vascellaro has details on The News Hub. Photo: Alison Yin for The Wall Street Journal.

Entrepreneurs in California have quietly launched dozens of small hardware companies, designing everything from smart wristwatches to digital thermostats. The typical business plan: raise enough money to create prototypes in the U.S. that can be manufactured in Asia and sold online.

These consumer-electronics makers are attracting new interest as some of the Internet frenzy abates following spotty performances by newly public Web companies like Facebook Inc. and Zynga Inc.

One team taking advantage of the shift is husband-and-wife duo Abe Fetterman and Lisa Qiu, who in June set up a hardware company in their two-bedroom San Francisco apartment. The couple is making a $359 kitchen appliance dubbed Nomiku, which people can use to sous-vide food—that is, cook meats and vegetables in airtight plastic bags in a water bath.

The couple didn't take a traditional venture-capital route to launching Nomiku. In March, they flew to Shenzhen, China, to participate in a three-month program at hardware accelerator Haxlr8r, where they learned how to make a product prototype. In June, they decided to raise money through crowdfunding websites Kickstarter and AngelList.

Now they have snagged more than $580,000 through Kickstarter and are aiming to close on seed funding in the next few months. "Most hardware start-ups are going the same route as us," said Ms. Qiu, 24 years old. 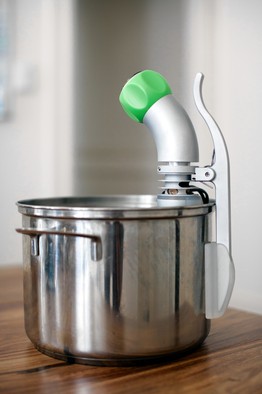 A prototype of the Nomiku cooking device, attached to a pot.

The rebirth of these tiny consumer-electronics start-ups—often through similarly scrappy means—goes against conventional wisdom.

For years, such companies were stigmatized as expensive to fund and operate, given the costs of manufacturing and retail distribution. The consumer-electronics market is also dominated by giant companies such as Apple Inc., Sony Corp. and Samsung Electronics Co.

But the economics of starting a hardware company have changed. Prototyping costs have dropped with the advent of 3-D printers and incubators that provide machining tools. Third-party services have sprung up to help start-ups navigate the manufacturing process in countries like China. And some factories are willing to do smaller product runs, allowing start-ups to turn out just a few thousand units at a time.

Rob Coneybeer, a venture capitalist at Shasta Ventures who has invested in smart thermostat maker Nest Labs Inc., said the cost of making a consumer-electronics prototype has dropped to $500,000 to $1 million today. That's down from $20 million to $25 million a decade ago, according to industry estimates.

Today's hardware start-ups also can cut costs by outsourcing manufacturing to Asia and selling directly to consumers over the Internet.

And they can avoid holding inventory and warehouses, thanks to more efficient shipping routes from Asia and the ability to manage orders through a website instead of guessing how much product to give a traditional retailer ahead of time, said Liam Casey, chief executive of PCH International, which handles manufacturing and fulfillment for large and small tech companies.

Crowdfunding websites like Kickstarter and AngelList have also helped to even the playing field with financing. All of this is "democratizing entrepreneurship" for hardware makers, said Naval Ravikant, co-founder of AngelList, a website where young companies can apply to seek "seed" money.

Venture capital for consumer electronics remains scant compared with the plethora of cash available for Web companies, but investments into hardware start-ups are rising. Venture capitalists put $262.6 million into consumer-electronics companies last year—a fraction of the $5.2 billion that went into consumer Web firms—but that was up more than 50% from $130.4 million in 2010 and $108.8 million in 2009, according to VentureSource.

"With what's happened to daily-deals companies and social companies, people are realizing that a barrier to entry [with hardware] is a good thing," said Brian O'Malley, a venture capitalist at Battery Ventures who invested in headphone maker Skullcandy Inc. "If there isn't a lot of intellectual property in a business, others can be fast followers."

Others are launching through Kickstarter and other means. Smart wristwatch maker Pebble Technology Corp. of Palo Alto raised $10.27 million from Kickstarter in May. Incident Technologies, a Santa Clara, Calif., company that is making a digital guitar, raised $350,000 on Kickstarter and $1 million on AngelList earlier this year.

"We used to have to spread a much wider net [to raise money] because of an aversion to funding hardware," he said. "But now there's a congregation of people interested in the product category."

Not all of these start-ups will be able to scale up. The San Francisco-based maker of WakeMate, a smart wristband that helps people wake up, suffered production delays in 2010 and safety issues last year, and has since stopped making new products. Unplugged Instruments, a Silicon Valley start-up that was making a next-generation electronic guitar, also closed after failing to raise money this year.

For Ms. Qiu and Mr. Fetterman at Nomiku, the key is stretching out the cash they have raised. So far, the couple has spent $20,000 to make the prototype of their Nomiku machine. They plan to go into production in the next few months, while also seeking to other financing.

"We've thrown everything to the wind to commit to this," said Ms. Qiu.

—Ian Sherr contributed to this article.