Do you know your Medication Adherence Score?

Fair Isaac Co. thinks it does. The company that created the FICO credit score is branching into new territory, assembling disparate data in an effort to better understand a range of human behaviors.

"We know what you're going to do tomorrow," Mark Greene, Fair Isaac's chief executive, told investors earlier this year.

The Medication Adherence Score is Fair Isaac's latest innovation. It aims to gauge the likelihood that a person will take his prescribed medications. Though the company is mum about how it crunches numbers, the score is based partly on how long a person has lived at the same address and whether he owns a car.

Fair Isaac hopes health-care providers will use the score to cut costs by targeting email and other reminders at people who are less likely to take their drugs.

"Data is good," Mr. Greene said in an interview. "The more data we have access to, the more insight we have." 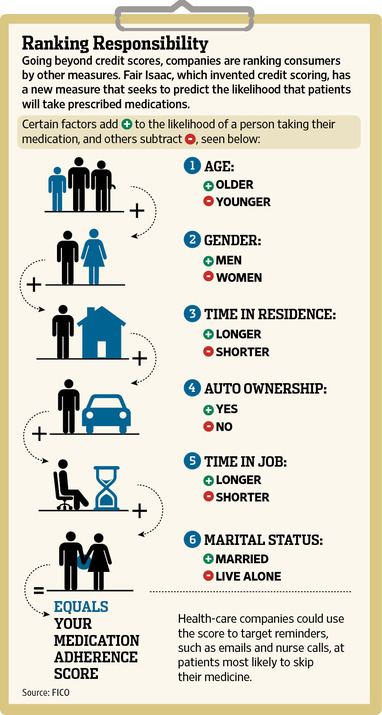 Fair Isaac's partners and sometimes-rivals at the nation's credit bureaus also are delving deeper into consumers' financial histories to generate tailored scores, which influence where a person can live and work and how much they have to pay for insurance.

Experian PLC, the credit-report giant, recently introduced an Income Insight score, designed to estimate the income of a credit-card applicant based on the applicant's credit history. Another Experian score attempts to gauge the odds that a consumer will file for bankruptcy.

Rival credit reporter Equifax Inc. offers an Ability to Pay Index and a Discretionary Spending Index that purports to indicate whether people have extra money burning a hole in their pocket.

The proliferation of "scores" highlights the widening trade in personal information, which is already fueling public concern about diminishing personal privacy. It also shows how data collected for one purpose, such as credit histories, are increasingly used for others.

Many scores are built on the premise that people who pay their bills on time are likely to be accountable in other ways. "There's a 'responsibility' thought lurking inside" many measures, said Fair Isaac's Mr. Greene.

Verifying income through tax forms would cost more than $10, which he said would be too expensive for some types of cards. To develop the score, Experian obtained anonymous tax data from the Internal Revenue Service and compared it with its own database of credit histories.

Scoring-company executives say their products are fairer and more consistent than the subjective judgments they often replace. Though they concede their formulas aren't perfect, they say credit-based scores increase economic efficiency, improving people's access to loans and cheaper insurance.

The system "has been incredibly powerful for consumers," said Mr. Wagner.

Use of credit-related data is regulated by a federal law that gives people the right to see and correct information about them. But those provisions may not apply to some new products.

Experian says the provisions don't apply to Income Insight because it produces only an estimated income, and card issuers can't use the estimate alone to deny an applicant.

Consumer groups and privacy advocates say the scores can tag people with hard-to-escape labels, often based on flawed data or little science. "People make character judgments about you based on that FICO credit score that may or may not be accurate," said Chad Gentry of Community Credit Counseling Services in Denver, a nonprofit consumer adviser. "It's not the real world. It's just a computer program."

One flashpoint in these debates is employers' use of credit histories to check out potential hires. A 2003 study by researchers at Eastern Kentucky University found no correlation between credit scores and employees' job performance, or likelihood of being fired.

About 60% of employers check credit histories of some or all prospective hires, according to a 2010 survey by the Society of Human Resource Management.

A TransUnion spokesman said employers "should have access to information that can help them protect their workers from theft, and their businesses and their customers from losses."

A credit history may have hurt Deborah Aston, who managed the city-owned parking lot at the Eugene, Ore., airport from 2006 to 2010, after the city hired a new company, Republic Parking System, to run the lot. Republic required a background check for employees who wanted to keep their jobs.

Ms. Aston, who had filed for bankruptcy in 2009, wasn't re-hired. She said a Republic manager initially cited her bankruptcy filing, then later told her she had a poor attitude. She filed a complaint under an Oregon law that took effect in July 2010, limiting employers' use of credit information. Since 2007, six states have adopted similar laws.

Ms. Aston and Republic later settled. She said it took her a year to find a new job at a call center.

Bob Linehart, chief operating officer of Republic's airport division, declined to comment on Ms. Aston's experience, citing the settlement. He said credit checks are only one factor in the company's hiring.

Use of credit histories also raises concerns about racial discrimination, because studies show blacks and Hispanics, on average, have lower credit scores than non-Hispanic whites. The U.S. Equal Employment Opportunity Commission filed suit last December against the Kaplan Higher Education unit of Washington Post Co., claiming it discriminated against black employees and applicants by using credit-based screens that were "not job-related."

The lawsuit followed a complaint to the EEOC by a Cleveland-area woman who alleged Kaplan had hired her as a financial-aid adviser in February 2009 and fired her 10 days later because of her credit report.

The lawsuit is pending. A Kaplan spokesman said the company is an equal-opportunity employer and is "proud of the diversity" of its work force. He said Kaplan checks credit histories for jobs involving finance.

Credit-based insurance rates raise similar concerns. A 2007 Federal Trade Commission study found that credit scores weren't being used as a "proxy" for race in setting insurance rates, but the study has critics.

One of those critics is Florida Insurance Commissioner Kevin McCarty, who told Congress in 2008 that credit-based insurance scores are "indirectly measuring socioeconomic status," hurting minorities, the young and the elderly.

Write to Scott Thurm at scott.thurm@wsj.com